Beatrix Potter 50p coins are a collection of beautifully designed fifty pence coins from The Royal Mint in the UK.

First released in 2016, these coins have been a massive hit with the UK public and around the world resulting in additional special edition coins being released each year by The Royal Mint to satisfy the needs of the more serious coin collector.

You can buy coins in many versions from coins that have been found in general UK coin circulation up to gold proof coins.

We are often asked at ukcoins.co.uk, which are the rarest Beatrix Potter coins in circulation.

The Royal Mint first issued this fifty pence coin series in twenty sixteen to celebrate the 150th anniversary of the birth of Beatrix Potter.

So the scarcest Beatrix Potter coin in general circulation is the 2018 Peter Rabbit along with Flopsy Bunney at 1.4 million coins minted.

Next is Mrs. Tittlemouse with 1.7 million coins followed by our personal favourite, Jemima Puddle-Duck at 2.1 million coins.

Each of these sells to British coin collectors for more than their fifty pence face value.

2018 coins include Peter Rabbit, Mrs. Tittlemouse, The Tailor of Gloucester, and Flopsy Bunny.

2019 and 2020 Peter Rabbit coins were not put into official circulation.

For example the 2016 Beatrix Potter coins had a maximum coin mintage of 16,000, with 15,000 being sold as the silver proof limited edition presentation. The other 1,000 coins were sold as in a black case for the Royal Mail via the Post Office.

Know the facts from fiction

As part of the Beatrix Potter 50p Coins, The Royal Mint issued 4 versions of the Peter Rabbit 2016 50p

Coins with Stickers / Decals. Please note: These are NOT Silver Proof coins, the colour sticker has been applied to a regular coin.

You can find the Beatrix Potter decals for sale on eBay, without the coin.

Whilst collectible to some people, we only collect coins as issued by The Royal Mint.

Struck from Sterling Silver to a Proof finish, a limited edition of just 40,000 coins. 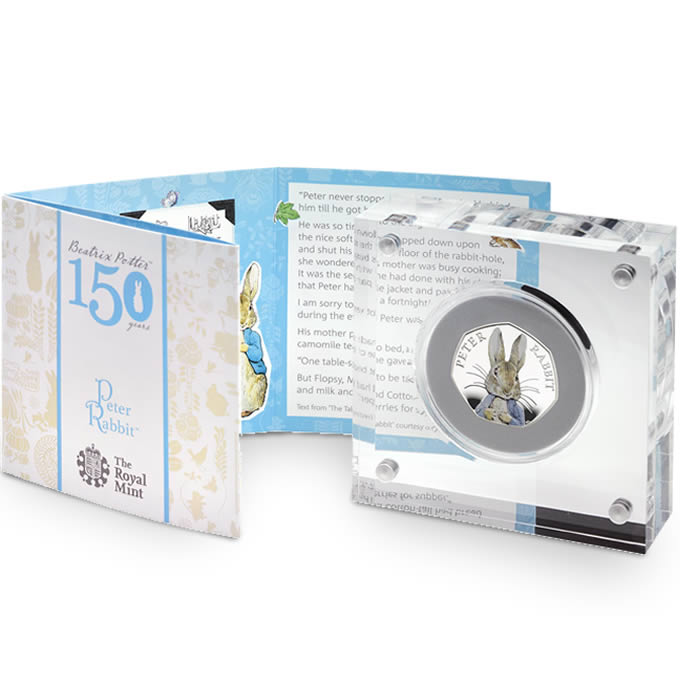 Struck from Sterling Silver to a Proof finish, a limited edition of only 15,000 coins minted makes this coin very rare with less than half the mintage figure of the 2017 version.

If you are on a coin hunt to collect all the Beatrix Potter coins from your pocket change then buy a Beatrix Potter 50p Coin Collector Album (contains no coins) for a fun way to display them.

If you have been looking for these attractive looking coins, no doubt you have seen eBay Sellers selling these coins from new bags from the Post Office. Some people may not realise some of these coins are still being sold directly from The Royal Mint.

First of all, if you wonder what BU means, it stands for Brilliant Uncirculated. A BU coin means it has never been in general circulation and consequently should be in mint condition.

Finally, make sure not to pay too much for a coin out of a bag of 20 others.

Frederick Warne & Co. is the owner of all rights, copyrights and trademarks in the Beatrix Potter character names and illustrations.