The 2009 Kew Gardens 50p coin value depends upon the condition as well as the fact that it is the rarest 50p coin that can be found in your pocket change in the UK.

As of February 2020, we have seen a recent average selling price on eBay for a circulated coin of £127

The super-rare SILVER PIEDFORT edition appears to have sold in November 2019 for £420. 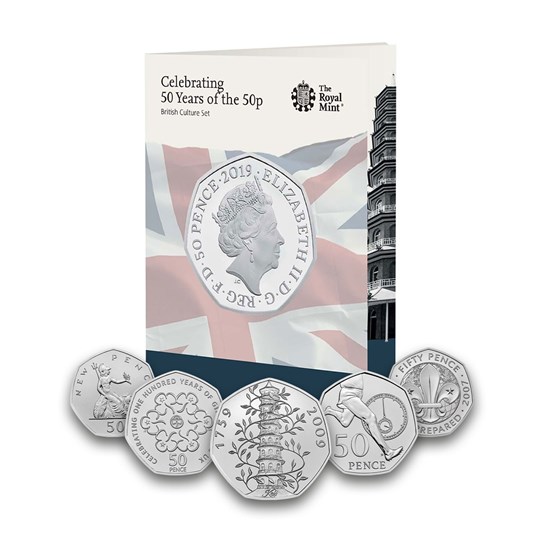 Here is the current eBay listings for Kew Gardens 50p coins for sale.

Check listing titles and descriptions very carefully and ask the Seller directly if a coin is a genuine 2009 coin from circulation.

These are not our coins for sale.

Brilliant uncirculated and Silver Proof editions of the Kew Gardens 50 pence coin can be found in the 2009 coin sets released by The Royal Mint.

Be aware that the mintage figures for some of the coin sets may be higher than that of the circulated coins, so they are not as rare.

How much are 2009 Kew Gardens 50p coins selling for on eBay?

Here is a list of Kew Gardens 50p coins recently sold on eBay. Click the title or image to view any directly on eBay. The data updates automatically so bookmark this page if you want to see updates.

Please check listings carefully and ask the Seller directly if a coin is genuine.

If you are not sure, don’t buy it!

The Kew Gardens 50p is the rarest 50 pence coin you will find in general circulation with only 210,000 minted.

It was issued by The Royal Mint in 2009, to celebrate the 250th anniversary of the foundation of Kew Gardens, Officially called The Royal Botanic Gardens in Kew near London.

The Royal Mint published that there is reportedly 1 Kew Gardens 50 pence for every 300 people in the UK (or 0.32% of the population) so you may have to dig deep to find one!

Beware of fake coins, see below for more details.

The Kew Gardens 50 pence was issued in 2009 with a low mintage of just 210,000 coins making it the rarest current sized 50p coin in UK general circulation.

210,000 coins were put in general circulation. For the BU and proof coin mintage figures, see the table below.

The Royal Mint Coins Mintage Figures for 2009 are here:https://www.royalmint.com/discover/uk-coins/circulation-coin-mintage-figures/2009-dated-uk-collector-coin-sales/

The image below is what the original 2009 Kew Gardens 50 pence coin should look like.

The design shows the pagoda at Kew encircled by a vine and accompanied by the dates “1759” and “2009”, with the word “KEW” at the base of the pagoda.

In 2009 the Royal Botanic Gardens at Kew marked its 250th anniversary as a botanical garden and The Royal Mint was proud to join in the celebrations with a splendid commemorative design.

The reverse design, created by Christopher Le Brun RA, featured the famous Chinese Pagoda at Kew with a decorative leafy climber twining in and around the tower.

Struck in cupro-nickel and designed by Christopher Le Brun RA, this commemorative 50p coin celebrates the 250th anniversary of the foundation of the Royal Botanic Gardens at Kew.

It features the Chinese Pagoda surrounded by the dates 1759 and 2009.

The colourful pack tells the rich history of the Gardens and the architecture at Kew as well as the inspiration behind choosing the famous Pagoda as the centerpiece for the reverse design of the coin. 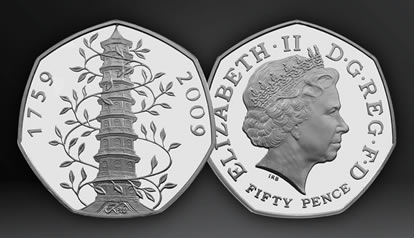 Displayed in a colourful presentation folder 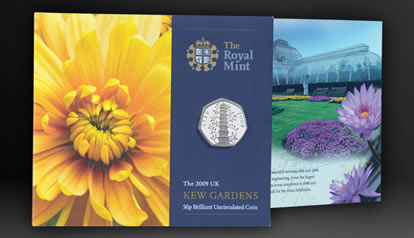 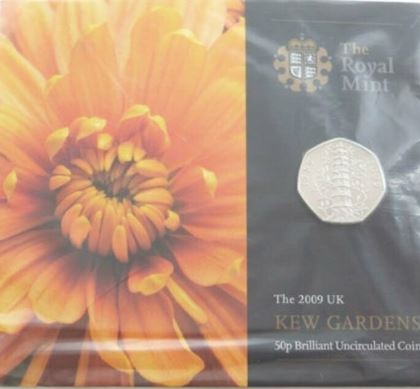 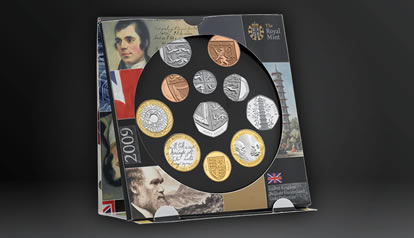 Struck to Brilliant Uncirculated standard, the 11 legal tender UK coins, including three commemorative designs for 2009, are beautifully presented in a colourful and informative presentation folder. The set is protected by an illustrated outer slipcase with an innovative cut-out that allows you to display the coins 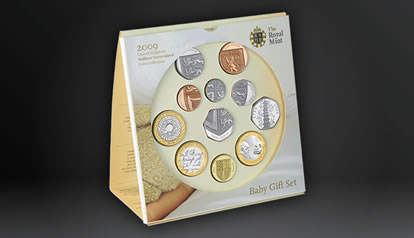 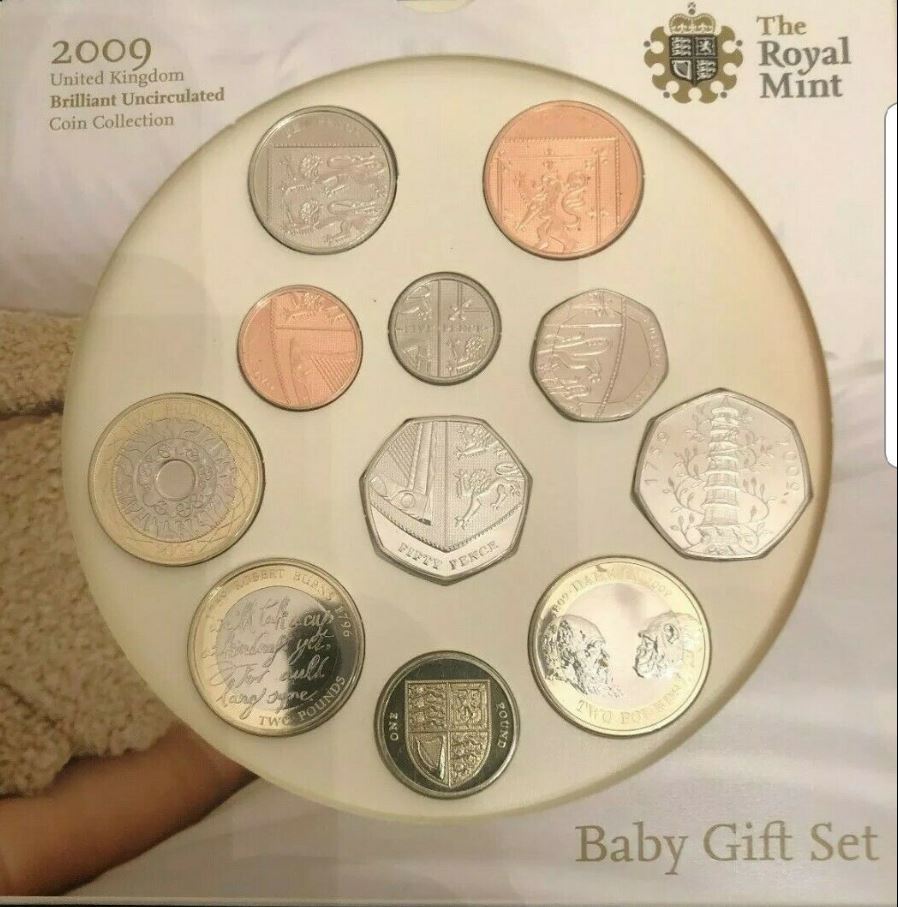 To celebrate the 250th anniversary of the Royal Botanic Gardens at Kew, with this limited-edition coin and stamp pack issued by the Royal Mint in conjunction with Royal Mail. 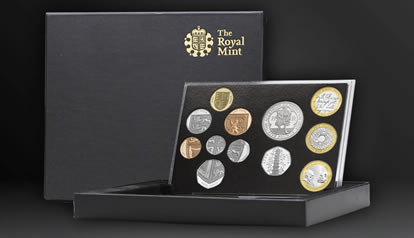 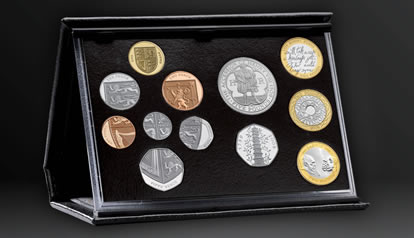 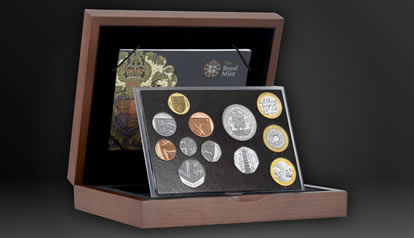 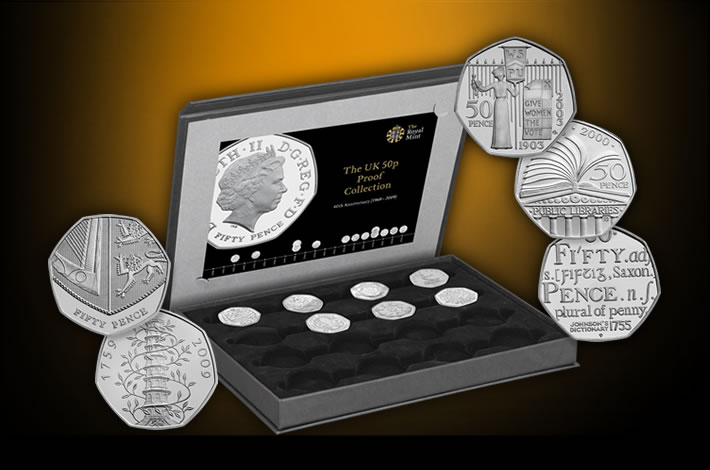 Celebrating 40 years of the 50p

Presented in a black presentation case 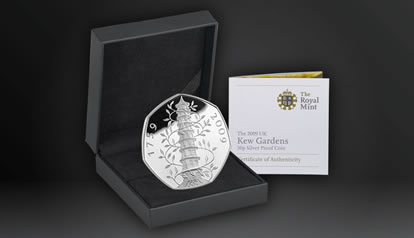 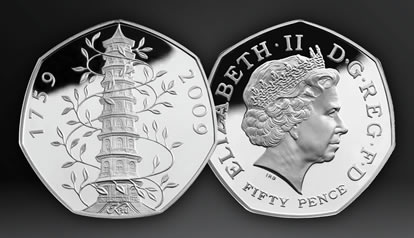 accompanied by a Certificate of Authenticity 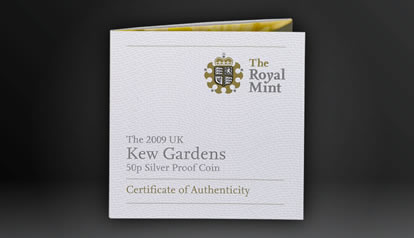 Accompanied by a full-colour booklet that incorporates an individually numbered Certificate of Authenticity. 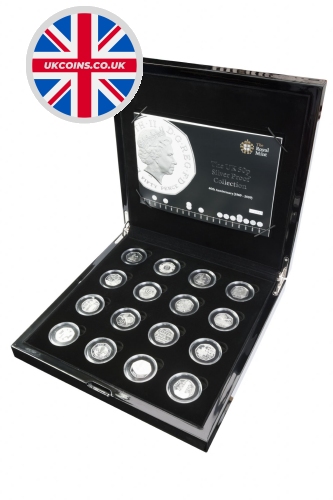 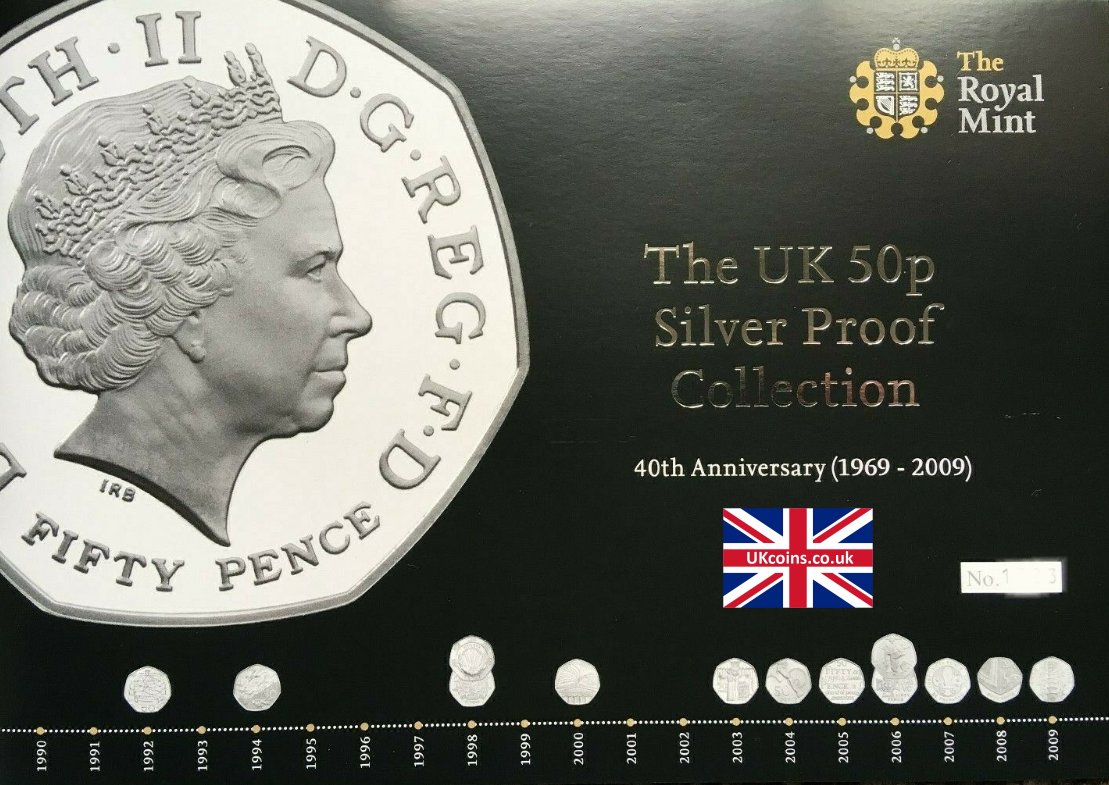 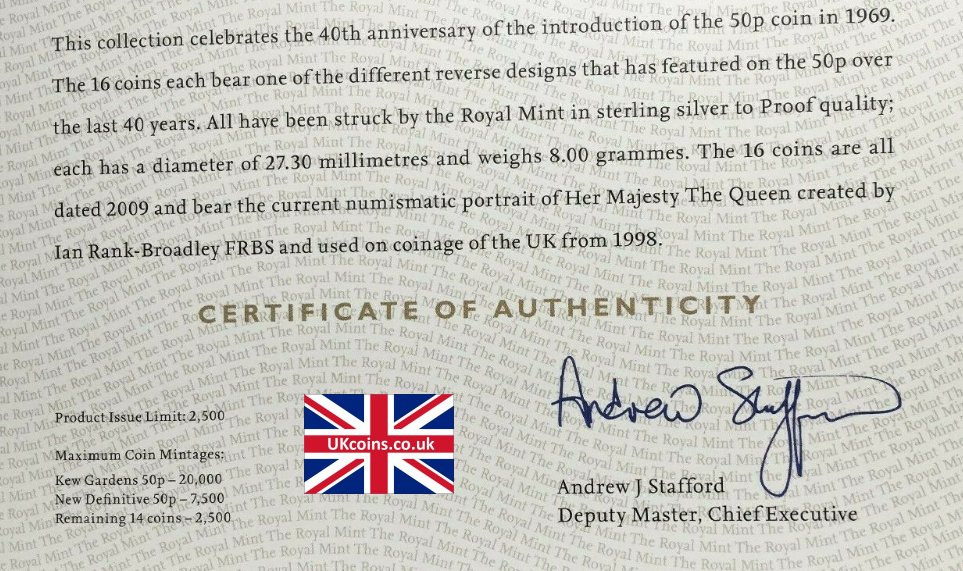 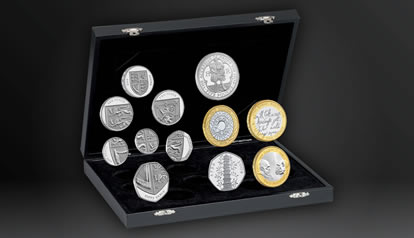 Struck in sterling silver the 12 Proof coins have been produced with meticulous care by skilled craftsmen at the Royal Mint.

Having been struck at least three times, these are supreme examples of the art of minting.

The coins feature the new designs by Matthew Dent which make up the distinctive shape of the shield of the Royal Arms.

Individually encapsulated the set is housed in a stylish black case and accompanied by a beautifully illustrated booklet, incorporating a numbered Certificate of Authenticity. 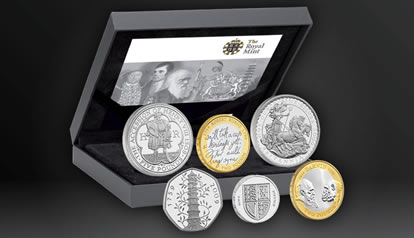 An informative booklet, which includes an individually numbered Certificate of Authenticity, completes the presentation.

This set is limited to only 1,500 and each one has an individually numbered Certificate of Authenticity. 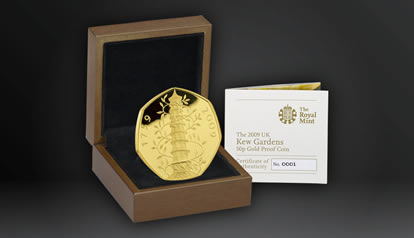 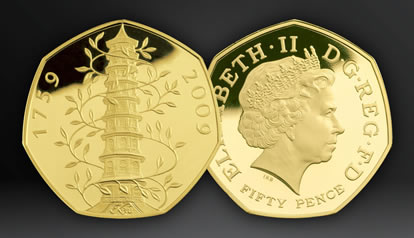 Accompanied by a Certificate of Authenticity 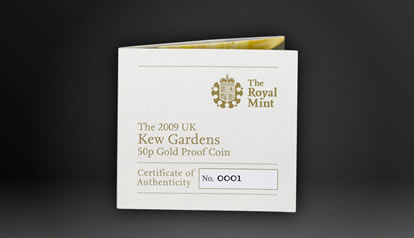 Although the maximum coin mintage for the 2009 Kew Gardens 50p Gold Proof coin was set to 1,000 coins, The Royal Mint website indicates that only 629 gold coins were sold. 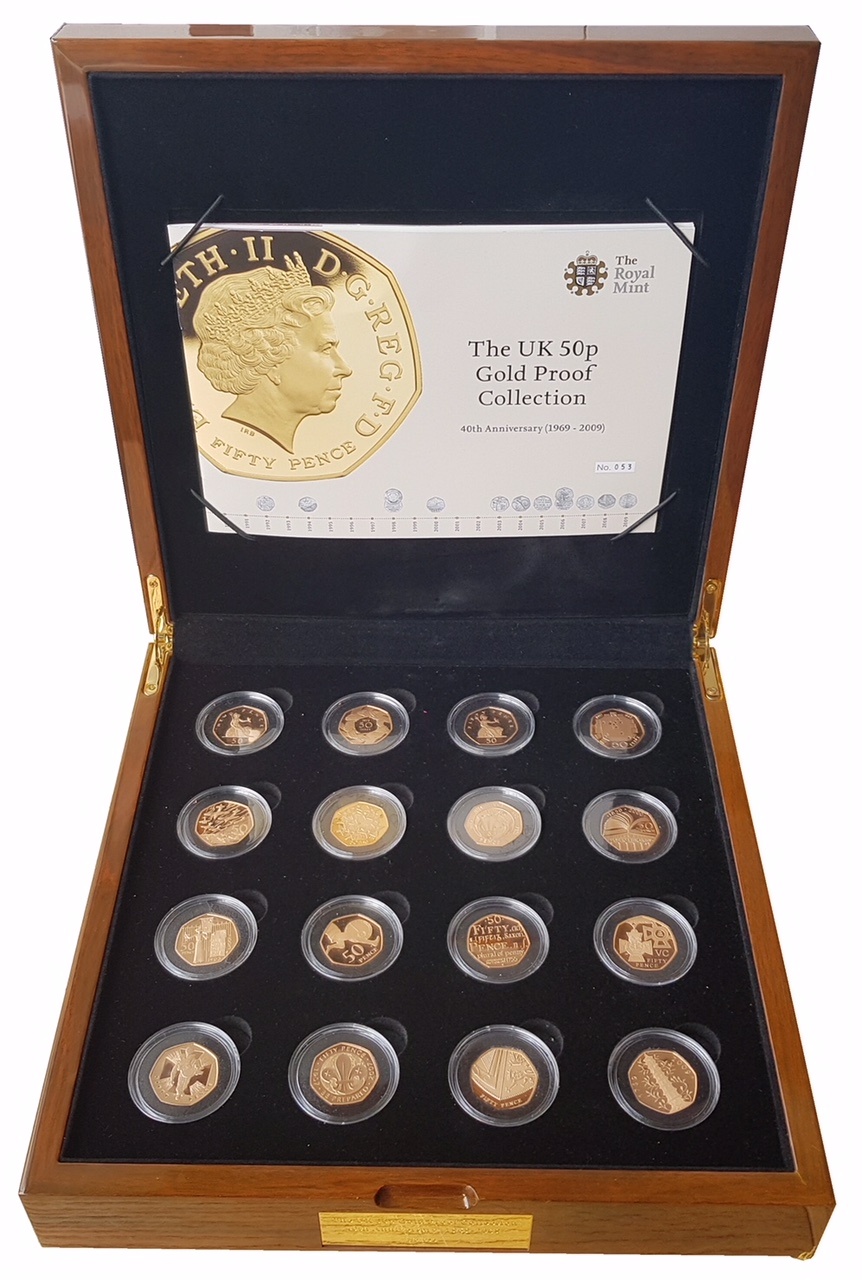 Each one of the 16 gold coins depicts a different design, one for each of the reverses used from 1969 to 2009.

Only 125 sets were issued by the Royal Mint.

All 16 coins are housed in their original Royal Mint presentation case, accompanied by a certificate of authenticity. 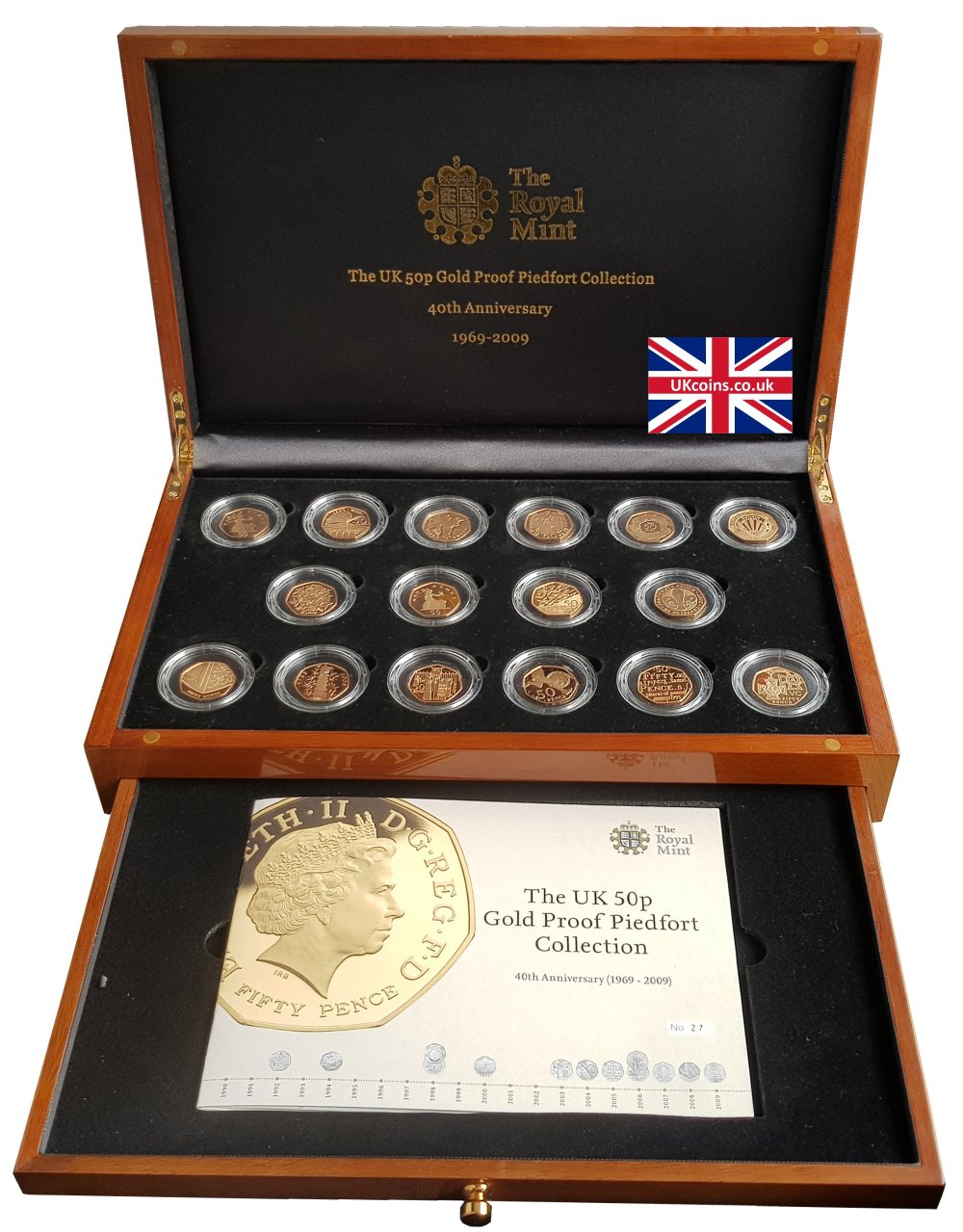 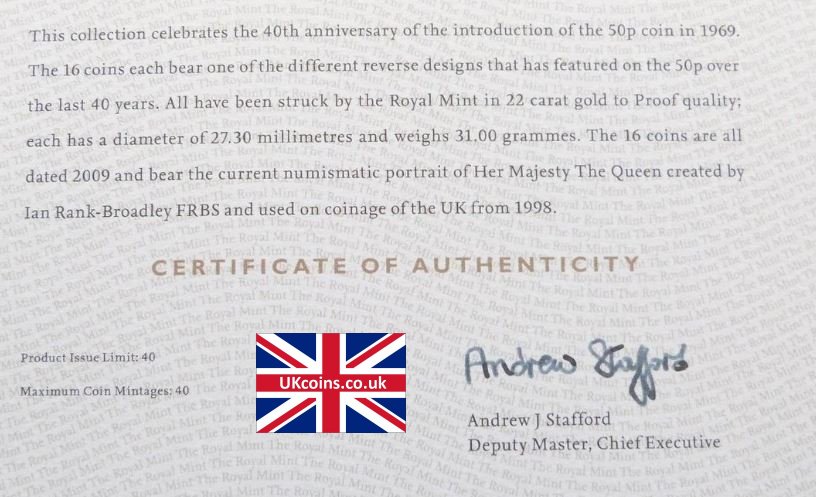 The 16 Gold Piedfort Coins Include:

Why does the Kew Gardens 50p have value?

What makes it special is that it has such a low mintage figure, compared to more normal UK coins.

This coin is worth 50 pence at face value (it is a legal currency so you can spend it in a shop). Most noteworthy is the low production numbers by The Royal Mint in 2009, this makes the coin rare and collectible by coin enthusiasts.

As a result, we have seen the price continue to rise as rare 50p fever hit the British Isles following a press release by The Royal mint announcing the Kew 50p as the rarest commemorative UK coin design to be released into current circulation.

The Kew Gardens 50p value depends upon which version of the coin you have (base, silver, silver piedfort or gold) and above all, what condition it is in (circulated, brilliant uncirculated or proof).

Therefore even well-circulated coins are selling fast on eBay as British Numismatists and casual coin collectors snap them up.So check your change, your kids piggy bank and under the mattress for any version of this coin as you will be quids in!

Here are some UK newspaper articles on the Kew 50p coin:

It has been reported that FAKE versions of the coin have been seen for sale, so study the images very closely before you make any purchase decisions.

Some Sellers are being honest about it so look for the words “COPY”, “SOUVENIR” and “FAKE” in the eBay listing, if you are happy to pay a small amount for a fake one that’s OK as long as you know what you are getting for your money.

We are not sure how it is possible for people to be openly selling fake UK currency, the Kew Gardens 50 pence is after all, legal tender in the UK which is why you may find one in your pocket change.

How can you tell if a Kew Gardens 50p is real?

There are 7 different known fake designs found to date. Look for the following characteristics:

If you compare a couple of different sales listings you should be able to see the differences.

What is the Pagoda? 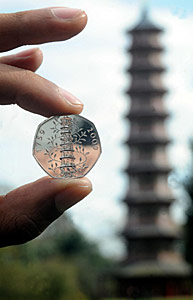 The Great Pagoda at Kew Gardens was completed in 1762.

This 10-storey octagonal structure is almost 50 metres high and is one of Kew Gardens’ landmark buildings, visible for miles around!

In 1759 Princess Augusta devoted a few acres of her gardens at Kew to a ‘Physic Garden’ where rare and unusual plants were cultivated for study.

It was the beginning of Kew’s destiny as a world leader in plant science.

The gardens were originally two royal Estates – the Kew Estate and the Richmond Estate – but were combined by George III in the late eighteenth century.

In the summer of 1771 the king met Joseph Banks who had just returned to England from a voyage with James Cook.

His collection of plants and animals and portfolios impressed the king and their mutual interest in agriculture led to Banks presiding over the Royal Society for 42 years. He was also an active member of many other influential societies, and was admired for his entrepreneurial skills.

Through his patronage and many initiatives Banks elevated Kew to a garden of national status and as a centre for botanical exploration in the colonies. Kew Gardens was handed to the nation in 1841.
During its long history as a royal estate and a government institution Kew has never lacked patrons or supporters. In recognition of its historic landscape, listed buildings, Herbarium and Library collections and its achievements in plant conservation, UNESCO awarded it World Heritage status in 2003.

Christopher Le Brun decided to choose the Chinese pagoda as he feels:

‘Like the London Red Bus, the Kew Gardens pagoda is an instantly recognisable symbol and rather to be cherished for that reason. So I decided not to resist such a strong image but rather to enjoy drawing it. The tower’s identity and perpendicular clarity is very useful in a design ‘I had the idea early on that plants should twine around and grow up through the tower.’