10/02/201826/10/2020 UK Coins
Disclosure: This post contains affiliate links which means we may get paid a commission if you make a qualifying purchase through our website. Using our link is at no additional cost to you.

Paddington fifty pence coins for sale. Some are still available direct from The Royal Mint.

Prices are correct at the time of posting but subject to change at any time due to variations in base metal prices.
Please check The Royal Mint website for the latest price and availability.

Paddington at the Tower 50p 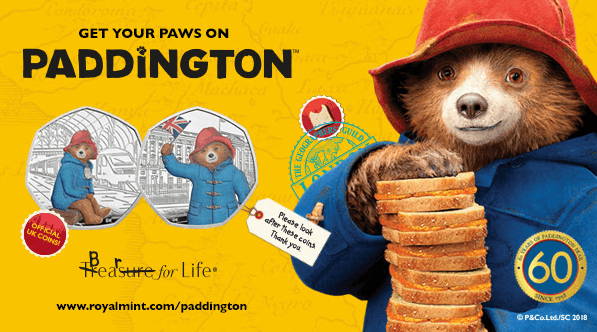 Paddington at the Station 50p

Paddington at the Palace 50p

Paddington™ at Buckingham Palace 2018 UK 50p Brilliant Uncirculated Coin. Part of a 2 coin set, still available from The Royal Mint as a BU coin in a presentation package. 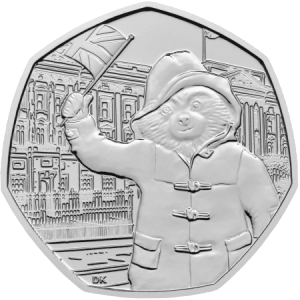 Paddington at The Station 50p

Paddington™ at the Station 2018 UK 50p Brilliant Uncirculated Coin, still available from The Royal Mint as a BU coin in a presentation package. 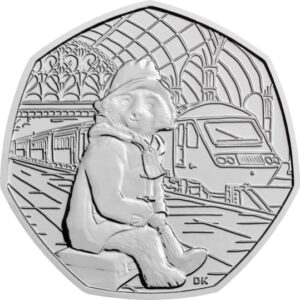 Paddington 50p coins were released by The Royal Mint in 2018 to celebrate the 60th Anniversary of Paddington’s first adventures in the famous book.

A first edition, first printing published by Collins in 1958
No items found.

Where to buy Paddington Bear coins?

Whilst you may be lucky enough to find Paddington 50 pence coins in your pocket change, chances are they are showing signs of being next to other coins in cash drawers or people’s pockets.

Coin collectors can purchase Brilliant Uncirculated (BU) coins, that have not been in general circulation. 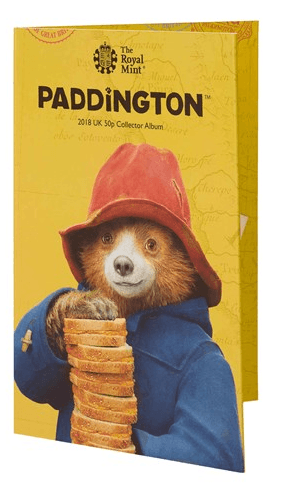 What’s the Paddington 50p worth?

Paddington Bear coin collectors can start with the Brilliant Uncirculated (BU) version of the Paddington at the Station 50 pence.

• Celebrate Paddington and relive his stories all over again
• Finished to Brilliant Uncirculated standard and presented in a colourful folder
• Britain’s best-loved bear – new adventures on a UK coin!

Presented in a colourful folder (see image below), this coin has been released Celebrate Paddington and relive his stories all over again.

The Silver Proof version of the Paddington Bear at the Station 50 pence, is presented in a clear acrylic case. This will be familiar to collectors of the wildishly popular Beatrix Potter 50p silver proof series, featuring Peter Rabbit and friends. Beautiful colour printing brings this silver coin to life with the familiar red hat and blue coat of Paddington waiting for a train.

The Beatrix Potter series was a limited mintage of 30,000 per coin in the series, the Royal Mint has elected to make the Paddington Bears coins available in a Limited Edition Presentation of 60,000. This means that more people will have the chance to secure Paddington coins, but on the flip side means it is half as rare as the Beatrix Potter coins. We think Paddington coins will be popular but it remains to be seen if he causes the same frenzy of buying and high prices on eBay after-sales as we saw with the 2016 Peter Rabbit coin. 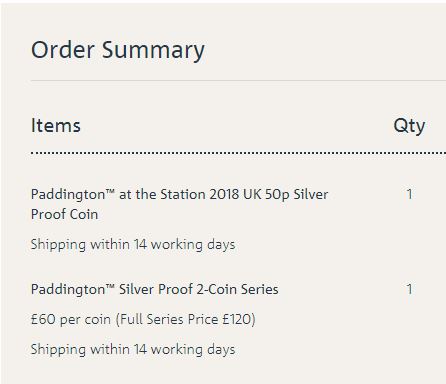 The mintage figures for the Silver Proof version of the Paddington 50p were confirmed by The Royal Mint on the 25th June 2018.

The Royal Mint announced that only 75,000 coins will ever be available of this Paddington 50p design.

Buy Now from The Royal Mint

The Paddington Gold Proof 2-Coin Series is now completely sold out at The Royal Mint. The issue price was £780 per coin (Full Series Price £1,560).

Paddington 50p Gold Proof Coins were released as a limited set of just 600 coins to be minted in each design.

These coins will be Quality Proof minted in Year 2018 from Pure Metal Type Gold.

The fictional bear from “Darkest Peru” has been featured in over 20 books written by British author Michael Bond. Paddington is dressed in an old red hat and blue duffle coat complete with a paper tag asking you to “Please look after this bear – thank you”. He sits on a battered old suitcase which has a secret compartment – allowing it to hold many more things than it would appear to! Paddington has a real love for marmalade!

The Paddington Bear 50 pence coins are being released as a set of 2 coins. The first on the 18th June 2018 and entitled, “Paddington at the Station”. When you order this coin in Silver of Gold Proof edition, you have the option to buy the Silver Proof 2-coin series or Gold Proof 2-coin series when you place your initial order. Above is a screen capture of our order for the silver set, the top shows the station coin, with a “2-coin series” add-on item below. This means you are pre-ordering the 2nd coin to be released in August from The Royal Mint and they will hold the authority to debit your payment card when it is ready for dispatch. This is a great way to secure both coins in the set, without having to remember to order the coin when it becomes available. Presumably, it means you are also sure of getting the coin ahead of new single coin orders.

Please check The Royal Mint website for Paddington 50 pence coin availability and prices before bidding on eBay, as some coins may still be available directly at their release prices.

The Paddington 50p is a 2 coin series with the Paddington bear 50p pre-order available for the 2nd coin in August 2018. Released to celebrate the Paddington bear 60th anniversary, these Royal Mint new coins include new coloured 50p versions of this new 50p coin for the Silver Proof mints. Royal Mint 50p 2018 releases continue to delight UK coin collectors around the world.

All Change At Paddington – installation timelapse

Paddington at the Tower 50p