12/12/201612/10/2020 UK Coins
Disclosure: This post contains affiliate links which means we may get paid a commission if you make a qualifying purchase through our website. Using our link is at no additional cost to you. 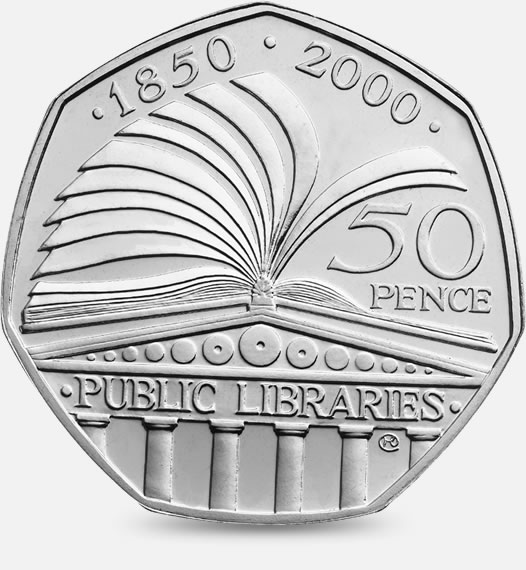 Commonly found in pocket change, this 50p was issued in the year 2000 to commemorate 150 years since the Public Libraries Act came into power in 1850.

Around 1 in 160 of 50 pence coins in general circulation have this design.

The purpose of the Public Libraries Act was to improve our quality of life by giving everyone free access to books. Previously only rich people could afford books in those days.

What is the 50p Public Libraries worth?

There were 3 versions of this coin produced by The Royal Mint. Those in general circulation (that you find in pocket change), a special edition in BU as a First Day Cover and Silver Proof.

We have seen circulated versions of this coin typically sell for £1 on eBay. See current Public Libraries 50p eBay listings.

Prices are a guide only and are based on recent sales we have seen on eBay. We do not value individual coins as condition and authenticity can vary wildly. Check our 50p coin values page for other coin prices.

How many Public Libraries 50p coins were produced?

The rarity of the Public Libraries 50p is sometimes hyped in the UK press as a “rare coin”, however with 11,263,000 Public Libraries 50p coins put into general circulation, it is collectible but not rare. Special Proof versions were also minted for the serious coin collector along with special presentation packs that are rarer.

A limited-edition of 35,000 coins and stamps were issued as a First Day Cover by The Royal Mint. Also known as a PNC. 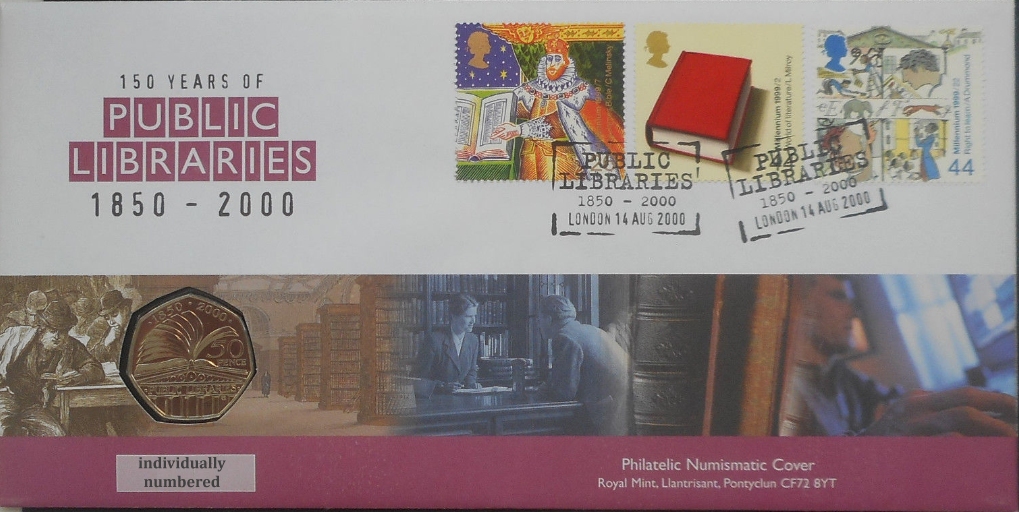 It looks like a red and white envelope with the issue number and the words “Philatelic Numismatic Cover”.

To read more on the history of Public Libraries, see http://www.politics.co.uk/reference/public-libraries

Minted in .925 Silver weighing 8gms with a limited edition presentation of 25,000 coins.