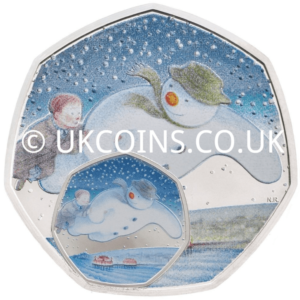 There are reports in the British Numismatic circles of an ERROR COIN version of The Snowman 50p, released in November 2018 by The Royal Mint.

The Snowman error coin has been officially verified by PCGS.

The cap and scarf and dressing gown are a blue/grey colour on some coins rather than the intended normal green and brown colours.

You may recall, 15,000 of the Silver Proof Snowman coins were minted, selling out in just a few hours on the day of release.

Since the initial hype this coin generated, with some coins being sold on eBay for many times their initial issue price of £60, some recipients have noticed a colour variation.

If you look at the picture above, we have done a picture-in-picture to show the difference.

The large Snowman image is from the Royal Mint website, where the hat and scarf on the Snowman are clearly green. Many of the promotional images for the coin and the movie, always show the colour as green also.

In the smaller 50p coin we have placed on top of this image, you can see the hat and scarf is BLUE!

The boy’s coat is also a blueish colour rather than the brown of the original.

Is the Snowman Error Coin rare?

How many of the coins were produced with this colour variation we have no way to know. It could be rare or very common. So time will tell.

PCGS graded a coin Proof 70 and labelled it an error coin as the label states “Mint Error” and “Blue Color Hat”. 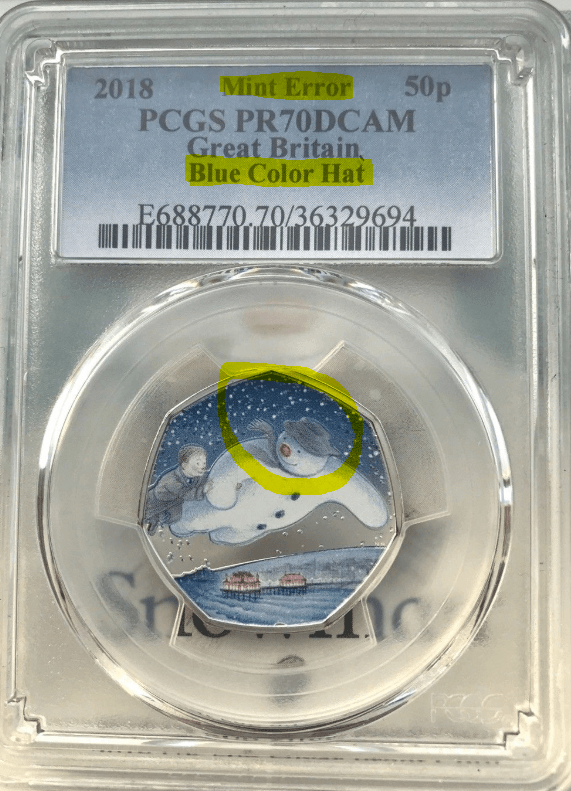 A one-off the only coin graded as an error and PR 70 is a bonus.

Another eBay Seller is stating that a badly placed decal is also an error coin:

Would you pay a premium for a poorly produced coin decal?

In our opinion, it’s not quite the same level as a mint stamping error.

We heard on a YouTube video by our favourite and renowned British numismatist, Numistacker, that when he asked the coin grading company NGC to recognise the blue hat and scarf snowman coin as a variation (or error), they declined to acknowledge any difference.

It will be interesting to see if the NGC grade any 2018 Snowman 50p coins as error coins in the future.

No word yet from The Royal Mint on this that we know of.

The Royal Mint is reported to have stated that it does NOT consider these coins to be “error coins” but rather that the colour differences are a result of “natural variation”.

A spokesman said: “The range of shades found on the commemorative Snowman coin are caused by natural variation during the printing process. We do not consider this an error.”

We will update this page if any new information becomes available.